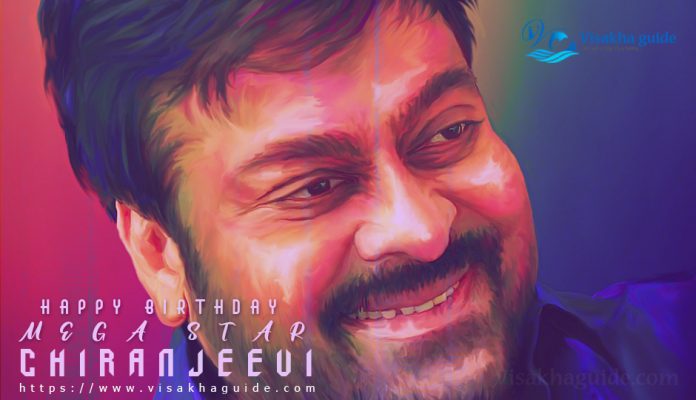 The Mega star Chiranjeevi actual name is Konidela Siva Sankara Vara Prasad. He was born on 22nd August 1955, at Mogalthur in the state of Andhra Pradesh, in India. He is most popular actor in tollywood and carved a name for himself in the Indian film industry with his dedication and commitment for performing art from the core of his heart to his audience at large.

He is also a film producer in Tollywood and former politician in the national political circle. In Telugu cinema, he predominantly works. Chiranjeevi Garu is known for his dance steps, risky fighting sequences and lengthy dialogue delivery in Tollywood. Chiranjeevi has carved a place for himself with his unique acting skill and choice of films.

In Telugu, Chiranjeevi starred in more than 150 feature films. He also acted in few films of other languages such as Tamil, Kannada and Hindi.  In a movie career spanning over 40 years, he has won successfully three a Raghupathi Venkaiah Award, Andhra Pradesh State Nandi Awards, and nine Filmfare Awards South.

He was honored with the Padma Bhushan, India’s third-highest civilian award In 2006, for his great contributions to Indian cinema. On the other hand, he was presented with an honorary doctorate from Andhra University.

It is to be highly noted that from 2012 and 2014, he served as the Minister of Tourism for the Government of India. Chiranjeevi Garu is a godfather for many youngsters and aspiring actors. He is the best role model for his enthusiastic fans and commoners.

Mega Star Chiranjeevi perfectly made his debut as a Television host with the popular fourth season of Meelo Evaru Koteeswarudu. On 13th February 2017, the first episode of the fourth season was lively aired on Star Maa. It is to be remembered that this is a game show which is a Telugu-language adaptation of Kaun Banega Crorepati.

On the occasion of actor Chiranjeevi’s birthday, his fans go crazy in whole day celebration with their family and friends. Most of his fans engage in charitable activities such as blood donation camps, distribution of school materials to the deserving students, medical assistance to needy patience, helping the poor’s etc.

The Chiranjeevi’s fans wholeheartedly wish him a healthy and prosperous year for their megastar. Some Chiru fans do make a person visit to his residence located at Jubilee Hills in Hyderabad or shooting set to personally wish him. In some villages and towns, fans conduct sports activities and cultural events. They distribute prizes to winners on the occasion of Chiranjeevi Garu’s birthday celebration gala.